There are some souvenirs money can’t buy.

A friend of my parents was terribly proud of a carved stone corbel he had ‘come upon’ in the masons’ yard of a Normandy cathedral. Someone with whom I shared a flat routinely ‘collected’ ashtrays and dinner plates from smart London restaurants and Cambridge colleges. And then there’s the interesting case of the late Professor John Halperin (1941-2018) who in September 1981 flew home to the United States with a small chunk of Jane Austen’s drawing-room wall tucked into his luggage.

While I have no idea what happened to the Norman corbel or my flatmate’s dishes, I am delighted to report that Professor Halperin’s acquisition was recently reunited with its original owner: us, Jane Austen’s House Museum, the property from whence it originated. Now encapsulated in a beautifully shiny acrylic block, the late professor evidently treasured his bit of Jane Austen’s wall and was careful to label it and list it among his valuables prior to his death.

To be clear, unlike my other examples Professor Halperin was no thief. He was a devoted biographer of Jane Austen and it was on this basis that the fragment was presented to him by Elizabeth Jenkins, a founding member of the Jane Austen Society, in 1981. According to the professor’s own label it had come loose during the renovation works which took place early in the Museum’s history. The date was around 1950 and years before the new conservation sciences of plaster and paint analysis would make an institution the best home for such an object.

With the return of the fragment to Jane Austen’s House we see how many facets there are to Austen’s material culture and legacy. This humble fragment of the building – complete with animal hair and apparently thick with grease – has gently assumed the status of a relic; a precious, portable antiquity from the ‘shrine’ that is the author’s home. 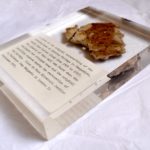 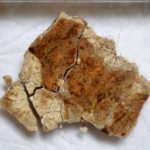 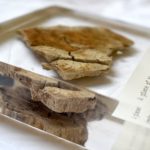 Credit: We are very grateful to the Trustees of the John Halperin Trust and the staff of Brierton, Jones & Jones LLP  for all their help in returning the fragment to the Museum.

To find out more about the early years of Jane Austen’s House, visit our Making the Museum exhibition, 1 February – 31 December 2019.