In February, Léna and Ellora looked at Jane Austen's teenage writings, her relationship with Cassandra and her love of country walks. They joined us for Love Fest, our Valentine's Day 'spectacular', at which they premiered their new works and shared their process with us.

This month, Ellora presented us with two new poems. We start with ‘Beautifull’…

Ellora: ‘Beautifull’ is an acrostic Golden Shovel, meaning that the first and last words of each line are from two different pre-existing texts – in this case, the dedication to Jane’s teenage short story The Beautifull Cassandra (read it here) and the heartbreaking letter Cassandra wrote on Jane’s death (read it here). Writing in this form let me bridge these two statements of sisterly love together, uniting their voices.

I’ve been reading Jane’s teenage writing lately, which is full of girls behaving badly. Lots of the images in ‘Beautifull’ have been taken from these wild, scandalous stories – the “steel trap” is borrowed from Jack & Alice, the “chewed-off fingers” from Henry & Eliza, the “Widow” from The Beautifull Cassandra, the “hollow oak” from Amelia Webster. These stories are brutally feminist which, of course, I took as the driving force for this poem.

Beautifull
An acrostic Golden Shovel after Jane and Cassandra Austen

Madam, girl, sow, heifer, hen. Love, sweetie, pet. She –
you – don’t listen. Punch the sky. Why? There was,
are, steel traps up there and gods too. Glisten, thistle. Be the
a-typical glitter-shaker. Don your mask – dagger-eyed sun,
phoenix grown from your own chewed-off fingers. Of
your precise hunger, I can’t say. I only know the hollow oak of my
taste for envelope glue; envious, spiteful & malicious. Life
is your 55-gun man-of-war. Gallop. Boom the jaw off the
refined dungeon, the womb you find yourself wounded in. Blister, gilder
your moon with your own haggard burning. Ignition fluid: cracked teacup of
sentiments gone red & warped in the raw of a mother’s throat. Every
are you listening, every telescopic lens of suffering. Let them choke. Pleasure,
noble pleasure. What else is there to say but that this is hard? The
& of a twisted body in the foetal position. Listen. You are no soother,
your soft is not feathers. Your soft is witch-ash. Duchess Widow of –,
virtues are lies bad fathers tell us. Paint yourself on the ceiling in every
innumerable shade of graze, gauze, nail polish, lipstick, fishnet, fury, sorrow.

Léna also used these two quotes for her first February project – a pair of Valentine’s Day cards, which we shared online as free printables. As many people have pointed out, however, these cards would work for so many occasions – Mother’s Day, a birthday, or just as a lovely little bit of lockdown post… 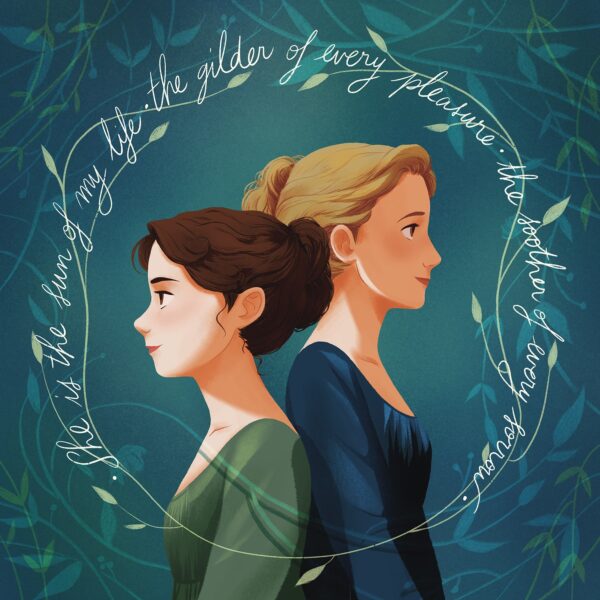 Ellora: My favourite scene in Pride and Prejudice is when Lizzy Bennett rocks up at Netherfield to be with her sick sister, Jane, with her petticoat “six inches deep in mud”, having walked all the way there by herself. For Lizzy, walking alone is presented as a rebellious act. When I was writing ‘Girl, Walking’ I had this scene in mind – as well as Jane Austen’s own love of country walks – as just one of the many aspects of Jane’s works that transcend time. We still love walking, perhaps now more than ever, being able to find solace and strength in nature. And I think it’s still seen as something of a rebellious act, for a young woman to go out walking on her own – we’re always told not to walk alone, to keep our keys in our hands, to make sure someone knows where you are and when you’re expected back. When a woman goes for a walk on her own, she is seen as taking a risk, she is seen as going against a society that tells her she needs to be safe and indoors, locked safely away from the weirdos. When we walk, we are all Lizzy Bennett in her dirty petticoat.

I am lucky enough to be local to Chawton, and able to walk the paths that Jane would have known. This poem is partially inspired by my walks around Jane’s village, the church referenced is the one on her brother’s estate, but I didn’t want it to be rooted to a certain time. It is simply a poem of a girl walking, finding freedom in and communing with nature. That, I think, is timeless.

I am a black syllable in the green blank,
my outlines are nettles with frost.
My aunty wishes I wouldn’t walk alone
even in daylight, even under this coronation of trees
always reaching to mother me, I am beloved.
I pick a dandelion and blow its bones over the edge.
In the distance, the church is a gap-toothed plaything.
If I am still too long the mud beneath the grass softens,
flexes its jaw, sucks my heel, reminds me that I am
still here. I can’t name the birds I hear or imagine
I am hearing. They just are, like teeth or strawberries.
Then I am amongst the sheep, a happily
torn-up nothing like the sheep, and I walk
and I walk towards the sun as though to a sister.

Léna continued her month with an artwork that explores Jane and Cassandra’s relationship – how they may have shared ideas, secrets and stories, and how Jane may have entrusted her sister with her work as it developed. We love how this illustration pulls the characters out of the book that Jane holds on her lap, making them larger than life, albeit in the black and white of pen and ink… 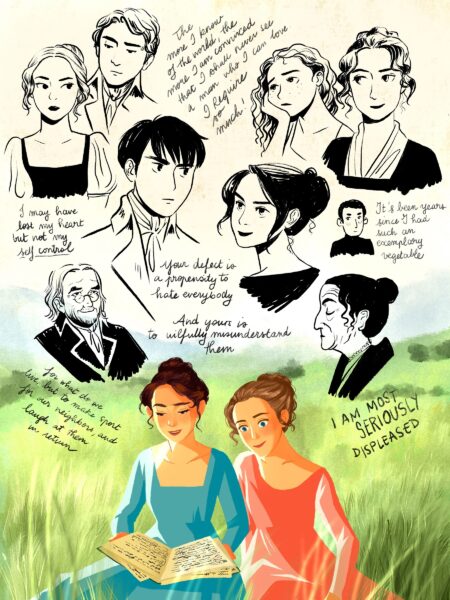 Come back in March to see what Léna and Ellora create in the last month of their residency!