This month, Cameron and Stephanie were inspired by Gothic fiction, ghosts and images of Jane herself to create a poem that plays with voices and a micro film that mixes live action with animation.

Stephanie: This month, Cameron and I took inspiration from the Gothic influence on Jane’s work – for me, the biggest source of inspiration was the first edition of Northanger Abbey in the House collection, and the story of the novel’s posthumous publication. I conceived this poem as a conversation between the ghostly Jane herself (imagined, in Cameron’s film, to be peacefully haunting the house at Chawton) and Catherine Morland, curious and imaginative protagonist of Northanger Abbey. Jane’s lines are on the left, while Catherine’s are on the right; they speak the lines in the centre together.

I wanted to think about how Jane’s ghostly body allows her to exist outside society, and how jealous Catherine would be of a ghost’s ability to go anywhere, unseen, in the pursuit of secrets. 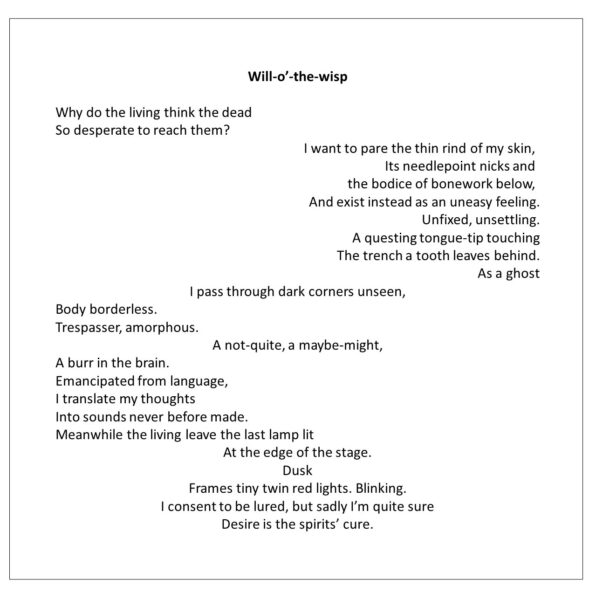 Cameron: I wanted to combine live action mixed with animation to contrast between the present day and the classic past. The mysterious ghostly figure in the grey cloak is Jane Austen’s ghost, purposely concealed to visually illustrate the illusive nature of her character as we know. There is a constant debate over what she actually looked like, fuelled by different portraits, which inspired me to adapt the painting style.

My goal with the film was to showcase that during the day visitors are able to absorb elements of the magic and history of Jane’s home. However at night, the house continues to breathe and is very much filled with wonder. As Jane walks around musing and pausing to read until dawn. Still here.

Check back next month to see what our Creatives produce in September!