Our new Creatives, writer Stephanie Lyttle and artist Cameron Carr, share the first works of their residency - inspired by our collection of music, dance illustrations and silhouettes.

Stephanie: My first poem is from the point of view of a social climbing female “villain” attending a ball. The use of contemporary language and anachronistic  references was inspired by one of the most playful objects in the House’s collection – a Barbie doll of Cher from Amy Heckerling’s Clueless (1995).

An Austen Villain Enters to the Sound of Pop Princesses

I’m on the checkerboard dancefloor.
Check out these chess pieces. Just guess
Which is the pawn, and which the queen.
Watch this witch hunt quick and mean,
Quiver strong, arrow clean –
I pierce good girls’ peace.
Light limns limbs
Like a cheap crime scene.
Big spree.

He dials my Dream Phone after dark
To feel my card shark spark.
I twirl the cord round my fingertips,
And part poison cherry-cola lips

Cameron: For my first piece I created an animation inspired by Jane Austen’s House itself, Chawton’s trees, and Jane’s summer garden. I then researched Regency lifestyle in contrast to nature, such as the ballroom, dances, music, interior and exterior architecture – often described by Jane Austen.

The ballroom was especially important for me to look into, since women back then only had a few societally accepted freedoms – one of them being to choose their dance partners. Also, the ballroom is one of the few places where both opposite sexes are seen as equals. And l wanted Jane to have her freedom. I wanted Jane to be a part of that fun, just like her heroines – the outlandish or outgoing.

The silhouette form was very fashionable in the Regency period, as it was an economic way to capture a portrait, but I had another reason for choosing it. Obviously, no one knows what Jane looks like, or who she might have been exactly. A silhouette, or shadowy figure, represents mystery in plain sight, which is how I see Jane.

The incredibly detailed background like the architecture had more documentation than the individual, and with that contrast further highlights this, and she became timeless, whilst the Regency Era has moved on.

Stephanie: For my second work, I decided to reflect Cameron’s beautiful film by making a poetic version of a silhouette using “blackout poetry”, a form in which words are blocked out of an original text to create a new poem. The text that provides the basis for this poem is from chapter nine of Pride and Prejudice. (It is page 31 of my childhood copy, a 1999 Wordsworth edition; I took the typed version of this page from the Project Gutenberg e-copy.) I changed nothing about the original text except for adding extra line breaks to improve readability of the final product.

I selected Pride and Prejudice as its dance scenes are arguably the most famous in the Austen canon. I chose this page specifically because it is the only page in the novel where the word “poetry” appears, it includes a charged conversation between Darcy and Lizzy, and it ends with a mention of the upcoming ball.

It is also a rather frantic page as many of the Bennet family are visiting Netherfield; four different characters have dialogue. My poetic version narrows the scope down just to Darcy, cutting through the noise – I was particularly inspired by the ball scene in Joe Wright’s film adaptation of Pride and Prejudice (2005) where the other dancers disappear, leaving only Lizzy and Darcy on screen. Blackout poetry puts the poet in the position of dancing with the text; there is a tension between what the poet wants to say, and the words that are available in the text to “speak” with – something that reminds me quite strongly of Lizzy and Darcy. 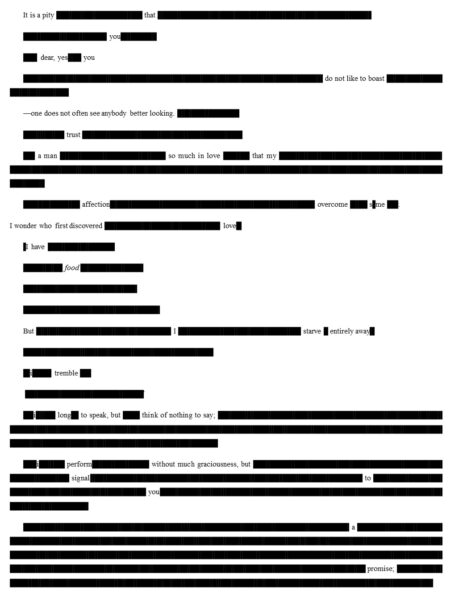 Check back next month to see what our clever Creatives get up to in August!