This month, our Creatives in Residence Ella and Zahra have created wonderful new works inspired by an extraordinary patchwork coverlet in the Museum's collection...

Zahra: For this poem, I’d started looking at the patchwork quilt, sewn together by Jane Austen, her sister Cassandra and their mother in the early nineteenth century. I was struck by the patterns, the precision and the idea of ritual. This poem is a re-imagining from Jane’s perspective, what this act of quilt-making means to her. The different forms of art-making and how they must have fed into each other.

Like a long poem, I keep threading squares
together. A forgotten skirt, faded flowers
on chintz, prints I am not ready to lose.

Over tea, the news of a great aunt’s illness
spills. By the fire, later, we pick it apart
like we do the loose knots, or undo a stitch.

brings up marriage – men’s shirts
I could be mending instead.
Dresses that could be passed on
to sweet grandchildren.

Not even the fire can quell
the ice in her words. Right
before it falls back into questions
about the day’s menu.

Or laughter, at the occasional
stitch gone astray.

Ella: A remarkable patchwork coverlet hangs in the Austen Treasures room of Jane Austen’s House. Jane, her sister Cassandra and their mother pieced together thousands of diamond-shaped scraps of fabric to create it.

My biscuit set for November is inspired by this coverlet. The smaller biscuits are based on some of the 64 dress and furnishing cottons that the Austen women collected and crafted to form the quilt. The large biscuits in the centre feature patterns from Jane Austen’s House and related collection items: the cover of a needle case gifted by Jane (top), the reproduction ‘Chawton Vine’ wallpaper design from the Drawing Room (right), an 1811 letter from Jane to Cassandra that mentions a ‘patchwork’ (bottom), and the reproduction ‘Chawton Leaf’ wallpaper design from the Dining Parlour (left).

These biscuits are flavoured with rose water, tying in with recipes from Martha Lloyd’s Household Book. The patterns were painted onto royal icing by hand using food colouring gels and vodka.

Watch to see how Ella painted the ‘Chawton Leaf’ biscuit… 🎨

**Update from Jane Austen’s House** We held a special outdoor staff meeting in honour of Ella’s biscuits and can confirm they are as delicious as they are beautiful! 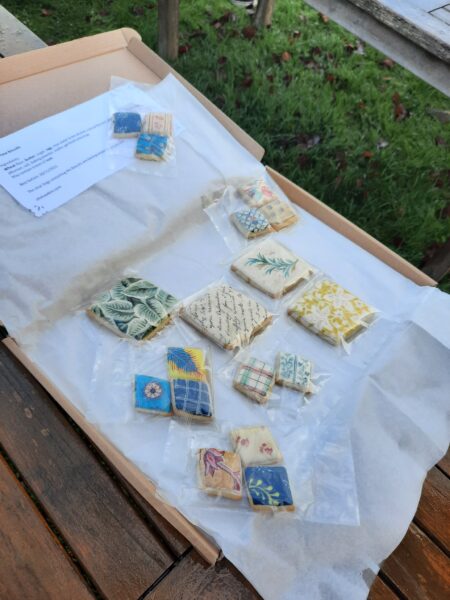 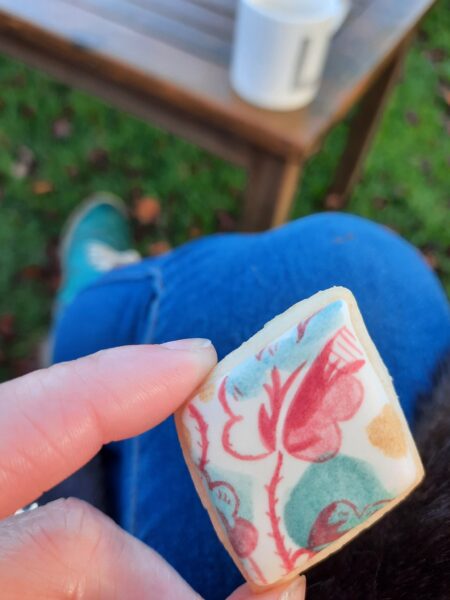 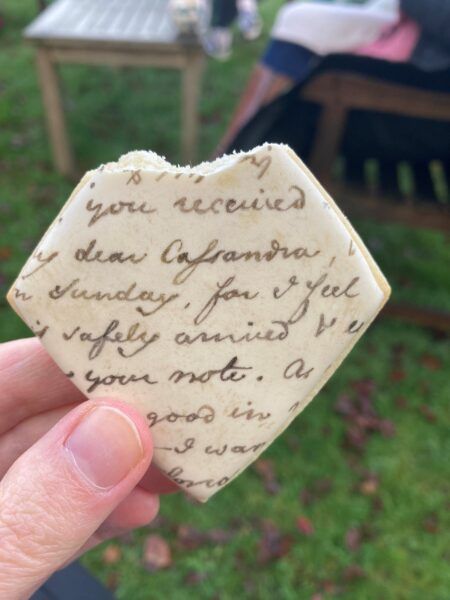 Ella and Zahra will complete their residency in December with their final works. We can’t wait to see what they create – check back soon to find out!