As the UK celebrates Pride month, Ellora Sutton explores what Jane Austen means to her as a member of the queer community, and how Jane Austen's novels can be interpreted through a queer lens.

Jane Austen’s novels have a truly universal appeal. One of the (many, many) things I love about working at Jane Austen’s House is how many people I get to meet – all ages, all genders, all nationalities – who adore Jane Austen as much as I do. For the uninitiated, such fanatics are affectionately known as ‘Janeites’, and I proudly count myself as a member of the Janeite community. I am also a member of the queer community. Seeing as June is Pride Month, I thought I would explore how these two identities – both, in my eyes, equally important to the make-up of my life and self – intersect.

One of the things that really leaps out to me as a queer reader of Austen, is her depiction of love – or, at least, falling in love – as an isolating, perhaps even dangerous experience. This relates largely to the era in which the novels are set. The characters have to be careful how many times they dance together in one evening, are aware of eyes constantly on them evaluating if there is indeed a match and how suitable that match might be. It can be socially devastating to be found to be attached to the wrong person, or even too attached to the right one at the wrong time. Unfortunately, this is something that queer people living today can still very much relate to, this danger of being ‘out’, either singly or as a couple, in a state of constant evaluation – do I come out to x, can we hold hands in front of y, can we hold hands walking down the high street or is it an unnecessary risk?

This makes me think the most of Jane Fairfax and Frank Churchill in Emma, who spend a good deal of the novel taking great pains to hide their secret engagement from the rest of the characters. Why? Because if Mrs Churchill, Frank’s wealthy aunt/adopted mother, finds out he will be disowned and disinherited. But this doesn’t stop him from loving Jane, from following her from Weymouth to Highbury and sending her the not-so-subtle gift of a pianoforte. From Jane’s side of things, keeping their love concealed is almost too much to withstand – as she says to Emma, “Miss Woodhouse, we all know at times what it is to be wearied in spirits. Mine, I confess, are exhausted.” This is the high emotional cost of living in such self-denial. Spoiler alert: Austen does, of course, give Frank and Jane their happy ending. Frank’s aunt rather conveniently dies, leaving him free to marry whosoever he may choose.

In my most recent rereading of Emma, this ending struck me for its parallels with a queer ‘coming out’ and its social ramifications, even today. In order to be with the person he loves, Frank has to lose his adoptive mother, just as many queer people around the world risk losing family relationships in coming out. When the other characters learn of the secret engagement, there is great disappointment, shock, and even outrage –the younger characters however, namely Emma and Harriet, are relatively unbothered by it, perhaps reflecting the progressive nature of youth. Jane and Frank overcome rigid societal structures and expectations – represented by Mrs Churchill – in order to be together, just as modern-day queer couples do. With this in mind, it’s interesting to consider the cinematic masterpiece that is Clueless, which retells Emma in the context of a 1990s Beverly Hills high school. The character of Frank Churchill is replaced with Christian, a gay teenager, drawing a direct comparison between the ‘closeted’ nature of Frank’s relationship with Jane Fairfax and the ‘closeting’ of queer people. It’s easy to imagine Christian having his own Jane – or, rather, James – Fairfax offstage, their relationship concealed due to the societal pressures of the day. Just as with her Austen counterpart, Cher remains good friends with Christian after he is ‘out’ to her.

Another character who can be read in a similar way is Persuasion’s Anne Elliot. As a young woman, Anne was shamed out of her engagement with Captain Wentworth, who was at the time neither a captain nor sufficiently rich for their relationship to be deemed socially acceptable. Here she differs from Frank Churchill and Jane Fairfax – she bows to societal pressure and the ‘persuasion’ of her own adoptive mother figure, Lady Russell. This, of course, doesn’t mean that she stops loving Wentworth, and here we see again this theme of love as an isolating experience; it is one thing to be suffering from unrequited love, but quite another to know it’s both returned yet impossible. She is isolated by her regret and yearning for Wentworth, viewing the world through a lens of what could have been – again, something that to me has striking similarities to the queer experience. Through the course of the novel, Anne learns to trust herself and therefore becomes herself, which could be read as a parallel to a sort of queer coming-of-age/coming out. She no longer denies herself the love of her life and, of course, marries her beloved Captain Wentworth. Jane’s novels are full of these stories of couples triumphing over societal expectations – Mr Darcy and Lizzie Bennet to name just one other example – and that is perhaps why I, as a gay woman, connect with them so deeply.

Jane Austen’s heroines are often presented as ‘other’, be that due to their sense or sensibility, their wealth or class, their worldviews or personalities. Harriet Smith is of unknown parentage. Catherine Morland is a socially unaware outsider in the glitzy world of Bath. Lady Susan is a viperous yet delicious and independent seductress. But I want to focus on Mansfield Park’s Fanny Price, who is perhaps the most othered – and thus, arguably, the queerest – of Jane’s heroines. Henry Crawford, when sizing Fanny up as a potential conquest, even asks, “What is her character? – Is she solemn? – Is she queer?” Fanny is othered in the setting of the grand estate of Mansfield Park by both her poverty – she is a poor relation, taken from her impoverished Portsmouth parents to be raised by her wealthy Aunt and Uncle Bertram – and her morals. This often leaves her on the outside of her own society, either looked down upon or forgotten about entirely, an effect of othering not unfamiliar to the queer community. Then there’s the episode where Fanny is roped into helping Mary Crawford rehearse a love scene for the oh-so-controversial theatricals, a risqué play called Lovers’ Vows. This sees two female characters, Mary and Fanny, through the artifice of theatre, declaring their love for one another “with looks and voice so truly feminine”. This has led some readers, such as Jane White in her essay ‘Of Rears and Vices: Queering Jane Austen’, to interpret the Mary-Edmund-Fanny love triangle as being, perhaps, more cyclical in nature.

Another way in which Jane Austen presents her heroines as ‘other’ is through gender nonconformity, which might seem tame to us but would have been revolutionary at the time of publication. Emma Woodhouse is coded as stereotypically masculine for the period – she is commandeering, independently wealthy, and lacks the typical feminine accomplishments expected of her. Lizzy Bennet in Pride and Prejudice laughs in the face of societal expectations and gender norms. She goes out on long walks, leading to a petticoat “six inches deep in mud” – not very genteel. And then she rejects not one but two proposals from men supposed to be her social superiors, going entirely against the ideals of passive femininity put upon her. But all this is relatively mild in comparison to Jane’s teenage writings, in which she shatters gender norms. In the short story Henry and Eliza, the titular heroine takes on the traditionally male role of military commander: “Eliza, being perfectly conscious of the derangement in their affairs, immediately on her Husband’s death set sail for England, in a man of War of 55 Guns”, before “rais[ing] an Army, with which she entirely demolished” a duchess who had crossed her earlier in the story. The teenage writings are full of these glimpses of queerness. The beautifull Cassandra contains this passage: “Cassandra started & Maria seemed surprised; they trembled, blushed, turned pale & passed each other in a mutual silence.” We are given no further context about this encounter and the nature of their acquaintance, but it immediately jumps out to me as queer. If we replace ‘Maria’ with a male name it would almost certainly be regarded as a flirtatious exchange, perhaps of two forbidden or shy young lovers passing in the street. I do still read it this way.

And so it is no surprise that queer people have always flocked to Jane Austen. This is doubly true in the world of theatre. In productions of Emma, Miss Bates is traditionally played by a man in drag. The first Mr Darcy (in 1899) was played by a woman – so, as in Mansfield Park, we have two women acting out confessions of love to one another. Jane herself was no stranger to the gender fluidity of theatre. As a young woman she adored taking part in theatricals at her Steventon home, and in later life acted in plays at her brother Edward’s house. Here she became particularly close with his governess, Anne Sharp, who especially enjoyed theatrical cross-dressing and taking on male roles, which itself could be considered queer. The first actors to portray Jane and her sister Cassandra (in the 1932 play Dear Jane) were out girlfriends Josephine Hutchinson and Eva Le Galliene.

Today there is a thriving queer Janeite community, from Facebook groups like Gay Austen to queer re-imaginings of the novels, such as Tamsen Parker’s modern-day lesbian retelling of Emma, called If I Loved You Less, to films like Before The Fall, an adaptation of Pride and Prejudice with two male leads.

What would Jane think of all this? As someone who quite clearly loved love, I like to think that she would approve. As she wrote in a letter to her niece Fanny Knight in 1814, “nothing can be compared to the misery of being bound without love”.

A note on the term ‘queer’: ‘Queer’ is a word with a long and complex history, not all of it positive. Having been used in the past as a slur it has been through a long process of reclamation into a word of pride, power and celebration. In this essay I use ‘queer’ as an inclusive umbrella term for those in the LGBTQIA+ community.

Queering the Work of Jane Austen Is Nothing New

The Queerness of Emma

The hidden lesbian love story in Pride And Prejudice

Ellora Sutton is a Visitor Services Assistant at Jane Austen’s House, and a queer prize-winning poet. Her work has been published or is forthcoming in The Poetry Review, Poetry News, fourteen poems, and Poetry Birmingham Literary Journal. She tweets @ellora_sutton. 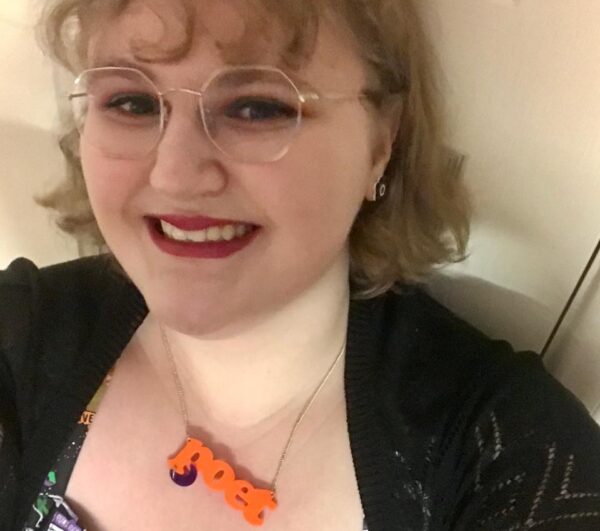