Object 1. A letter from Mrs Cassandra Austen to Mrs Walter, her sister-in-law, 20 August 1775 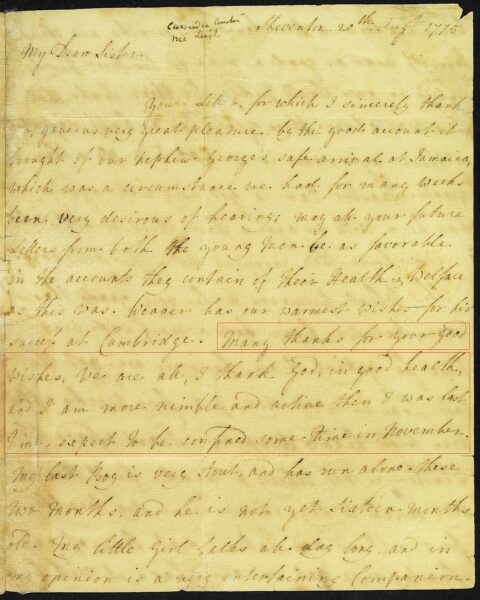 ‘Many thanks for your good wishes; we are all, I thank God, in good health, and I am more nimble and active than I was last time, expect to be confined some time in November.’

As we know, of course, Jane was born on 16 December during a bitterly cold winter. The Revd George Austen sending news of the birth the following day to his sister wrote:

‘You have doubtless been for some time in expectation of hearing from Hampshire, and perhaps wondered a little we were in our old age grown such bad reckoners but so it was, for Cassey certainly expected to have been brought to bed a month ago: however last night the time came, and without a great deal of warning, everything was soon happily over. We have now another girl, a present plaything for her sister Cassy and a future companion. She is to be Jenny’. 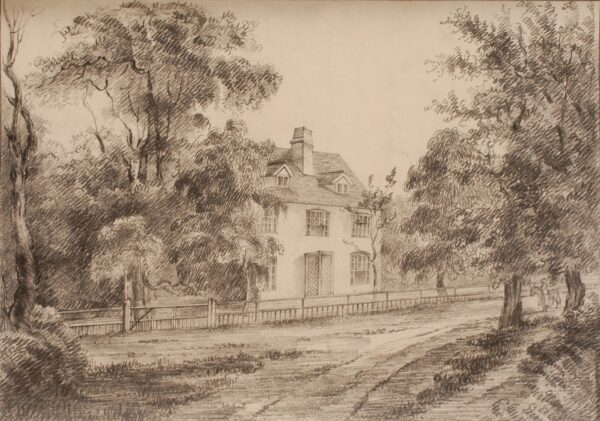 Pencil drawing of Steventon Rectory from the side, by Ben Lefroy, who married Anna Austen in November 1814

‘The house itself stood in a shallow valley, surrounded by sloping meadows, well sprinkled with elm trees, at the end of a small village of cottages, each well provided with a garden, scattered about prettily on either side of the road. It was sufficiently commodious to hold pupils in addition to a growing family, and was in those times considered to be above the average of parsonages.’ (James Edward Austen-Leigh, A Memoir of Jane Austen, 1870)