Room 4: A poem-letter to accompany a gift of handkerchiefs

Letters and their associated objects can give us precious insights into the intimate life of a great writer but we should be wary of how we use them. Jane Austen’s nephew and early biographer, James Edward Austen-Leigh, employed domestic detail—his aunt’s skills in letter writing and sewing—as a way of taming her creativity, making it appear simply domestic.

He wrote: ‘Jane Austen was successful in everything she attempted with her fingers … the writing was not the only part of her letters which showed superior handiwork … her paper was sure to take the right folds, and her sealing-wax to drop into the right place. Her needlework both plain and ornamental was excellent, and might almost have put a sewing machine to shame.’ (A Memoir of Jane Austen, 1870)

In fine needlework, as in letter writing, Austen performed a family task that fell to all gentry women; her novels witness something far different—an extraordinary genius that was hers alone.

Jane Austen occasionally wrote letters in verse to family and close friends.  This poem is no more than a note to accompany some homemade handkerchiefs but, like the poem inside the sewing kit that she sent to Mary Lloyd in January 1792, it is among the items that early prompted the link between Austen’s skills as a needlewoman and her neat handwriting.  As such, these little gift-notes are part of Austen mythology. 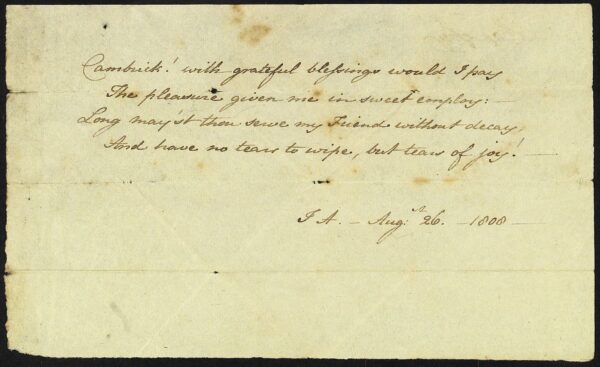 This needle case was a gift from Jane Austen to her niece Louisa Knight. Austen not only made handkerchiefs for family and friends and items for personal wear but shirts for her brothers. We should be suspicious, though, of James Edward Austen-Leigh’s complacent pronouncement that ‘the same hand which painted so exquisitely with the pen could work as delicately with the needle’ (A Memoir of Jane Austen, 1870). 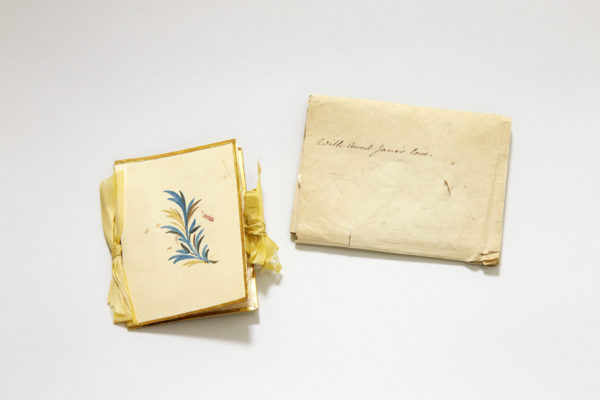