Between the ages of 11 and 17, Jane wrote short sketches, and collected them into three notebooks which she ironically titled Volume the First, Volume the Second, and Volume the Third. In their pages she spoofed contemporary fiction—classic works as well as the trashy novels she loved. Her satiric pen dissected the conduct books and popular histories that passed for education for young ladies at the close of the eighteenth century. The teenage stories are all about girls behaving badly—getting into fist fights, drinking, and stealing.  Their behaviour is very different from that of the heroines of her adult novels.

See the original manuscript in the Bodleian collection

Jane wrote to entertain a boisterous audience of family and friends and, most likely, of young male lodgers, her father’s pupils in the family home at Steventon. These domestic arrangements would encourage flirtatious performances and hysterical laughter at the hints of impropriety the stories contain. Many, like this play, centre on jokes involving drink and gender reversals: drunken girls and sober boys. What is going on here?

‘The Johnsons were a family of Love, & though a little addicted to the Bottle & the Dice, had many good Qualities’ , ‘Jack & Alice’, Volume the First, pp. 24-5.

Fish and other shapes were used as counters or gaming chips for betting in a variety of card games. In Austen’s adult novels, card games help while away long evenings, offer opportunities for characters to socialize and reveal aspects of their characters, and sometimes to hold important conversations under cover of the game.  This is a far cry from the hardened gambling of the teenage writings! 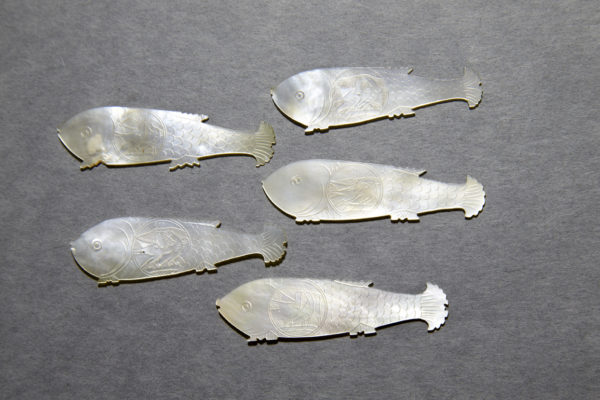 ‘it was determined that the next time we should either of us happen to go that way, we would take one or more of the Bank notes from the drawer’, ‘Love and Friendship’, Volume the Second, p. 40.

At the foot of this unissued note from the Alton Bank, the names of the partners are listed: ‘Austen, Gray & Vincent’. Austen is Henry Austen, Jane’s brother, who set up in banking in London in 1801.

Long before this, in 1792, the young Jane dedicated ‘Lesley-Castle’ to Henry and he added a postscript to her dedication, as follows: ‘Messrs Demand & Co—please to pay Jane Austen Spinster the sum of one hundred guineas on account of your Humbl. Servant. H. T. Austen. £105:0.0’. Volume the Second, p. 67.

Henry’s promise of extravagant financial reward taps into a theme in the teenage writings: virtue is not enough; without money ‘a Girl of Genius & Feeling’ is at the mercy of every social injustice (‘Kitty, or the Bower’, Volume the Third, p. 54). IT’S THE ECONOMY, STUPID! 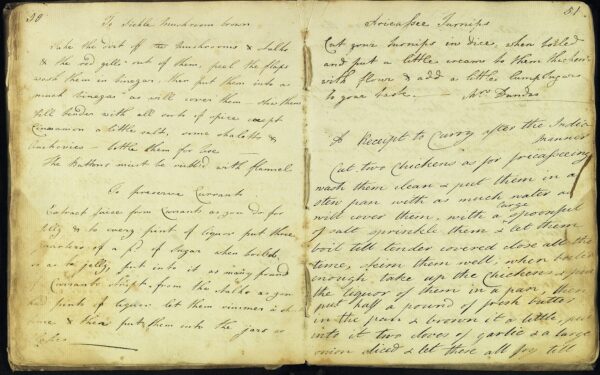 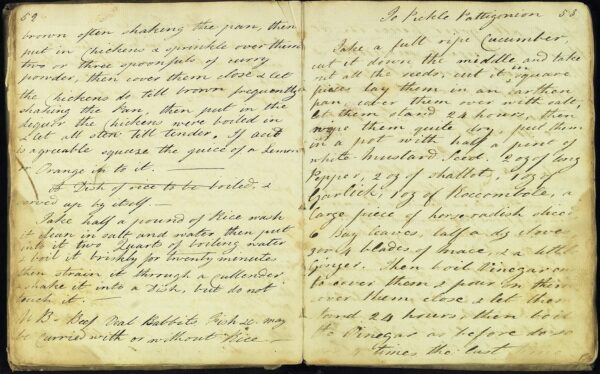 Read a transcript 📖 or listen to the recipe 🎧

‘I am usually at the fire cooking some little delicacy for the unhappy invalid—Perhaps hashing up the remains of an old Duck, toasting some cheese or making a Curry’, from ‘A beautiful description of the different effects of Sensibility on different Minds’, Volume the First, p. 176.

As dishes offered for the delicate stomach of an invalid, hashes and curries show just how experimental was the young Jane’s advice.

Although printed cookery books were available, handwritten collections of family recipes remained common. This recipe book was in use at Chawton Cottage during Austen’s lifetime. It belonged to Martha Lloyd, to whom many of the household duties devolved. Recipe books served multiple purposes: dishes to cook, herbal remedies, and tips for cleaning. Martha’s book shows the marks and stains of heavy use.  Interestingly, the notebook is identical to that used for housing the contents of Volume the Second.