‘You will have much pleasure in being in London’, Sense & Sensibility

Our final scene takes us from a comfortable country Christmas to the glamour of the capital. In this room we visit London with Elinor and Marianne, for ‘the season’

Whilst Jane Austen’s novels famously often concern themselves with ‘two or three families in a country village’, there is often an awareness of London on the edge of things. In Sense & Sensibility London becomes part of the action, as Elinor and Marianne go to stay with Mrs Jennings in her house ‘in one of the streets near Portman Square’.

Marianne spends the visit in agonies – first of hope and then of heartbreak – while Elinor spends her time in being polite to Mrs Jennings, looking after Marianne, being welcoming to Colonel Brandon and being courteous to everyone else.

The London visit is ruined for Marianne when she discovers that Willoughby has become engaged to another woman. Mrs Jennings’ attempts to cheer her up with Constantia wine, dried cherries, olives and sweetmeats go unheeded. In the midst of her heartbreak she cannot bear to remain in town, and longs to return to the countryside.

The London season coincided with the sitting of Parliament, beginning at some point after Christmas when fashionable families would move into their London houses. The men would attend Parliament, whilst the women shopped, visited, and found husbands for themselves or their daughters. It lasted until early summer, when the ‘beau monde’ would return to their country estates, escaping the city’s stifling heat and pungent smells.

The season was a whirlwind of court balls and concerts, private balls and dances, parties and sporting events. On a typical day, ladies would rise early to go riding in Hyde Park, before returning home to breakfast and spending the day shopping, dealing with correspondence and paying calls.

Dinner was taken late, usually between 6 and 7pm, and then the family might attend an evening party, concert or play. Balls and dances started later, usually at 10pm, and went on until 3 or 4am.

And the point of it all was, in many instances, about marriage. London in the season was a marriage market, where young women could present themselves and men could choose a wife…

‘I was very lucky in my gloves, got them at the first shop I went to, though I went into it rather because it was near than because it looked at all like a glove shop, & only gave four Shillings for them;’
Jane Austen to Cassandra, Thursday 20 May 1813

The London scenes in Sense & Sensibility are full of lively interest and realism, reflecting Jane’s real knowledge of the city. In particular it is notable that the Dashwoods visit real shops such as Gray’s, a jeweller in Sackville Street. Here they bump into Robert Ferrars, who embodies the fashionable fop:

‘He was giving orders for a toothpick-case for himself, and till its size, shape, and ornaments were determined, all of which, after examining and debating for a quarter of an hour over every toothpick-case in the shop, were finally arranged by his own inventive fancy, he had no leisure to bestow any other attention on the two ladies, than what was comprised in three or four very broad stares’ 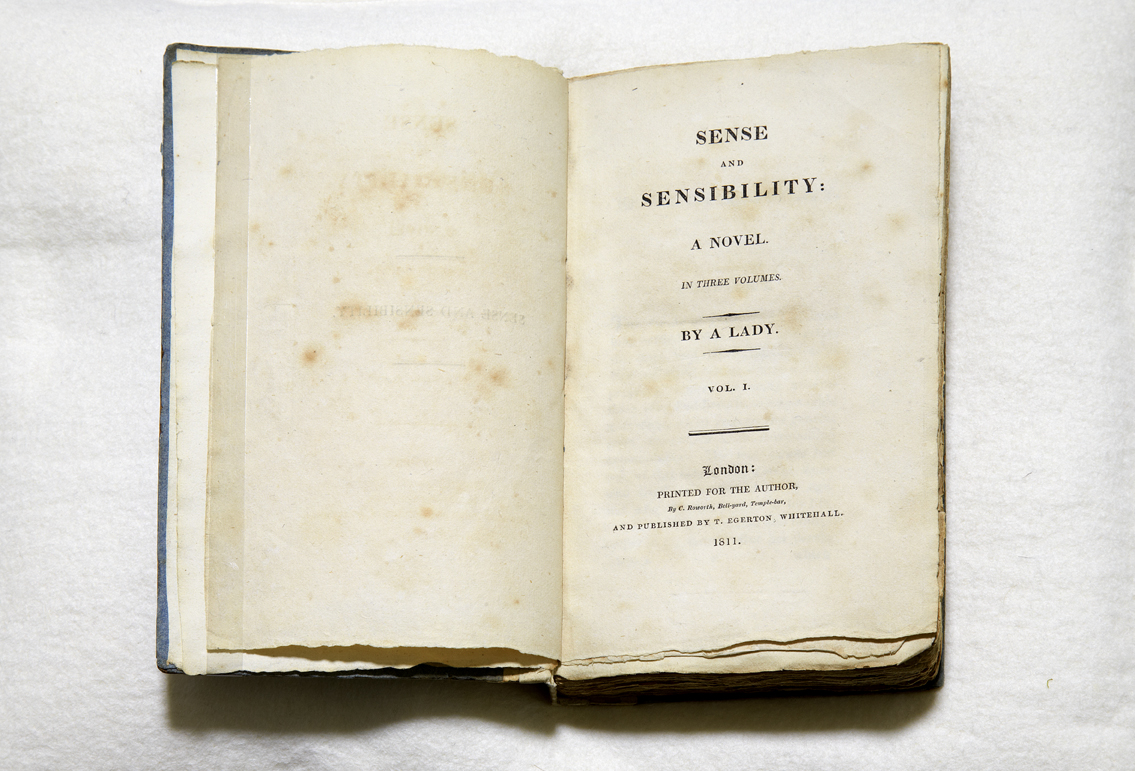 Sense & Sensibility was Jane Austen’s first published novel. She originally drafted it in 1795 whilst living in Steventon, at which time it was called Elinor & Marianne. Jane revised the text in Steventon in 1797-8, and again in Chawton in 1809-10.

Jane’s brother Henry secured her a publisher, Thomas Egerton, who published the novel on commission (meaning that the author took the financial risk, rather than the publisher). Sense & Sensibility appeared at the end of October 1811. It was published anonymously; the title page simply stated that it was ‘By a Lady’. 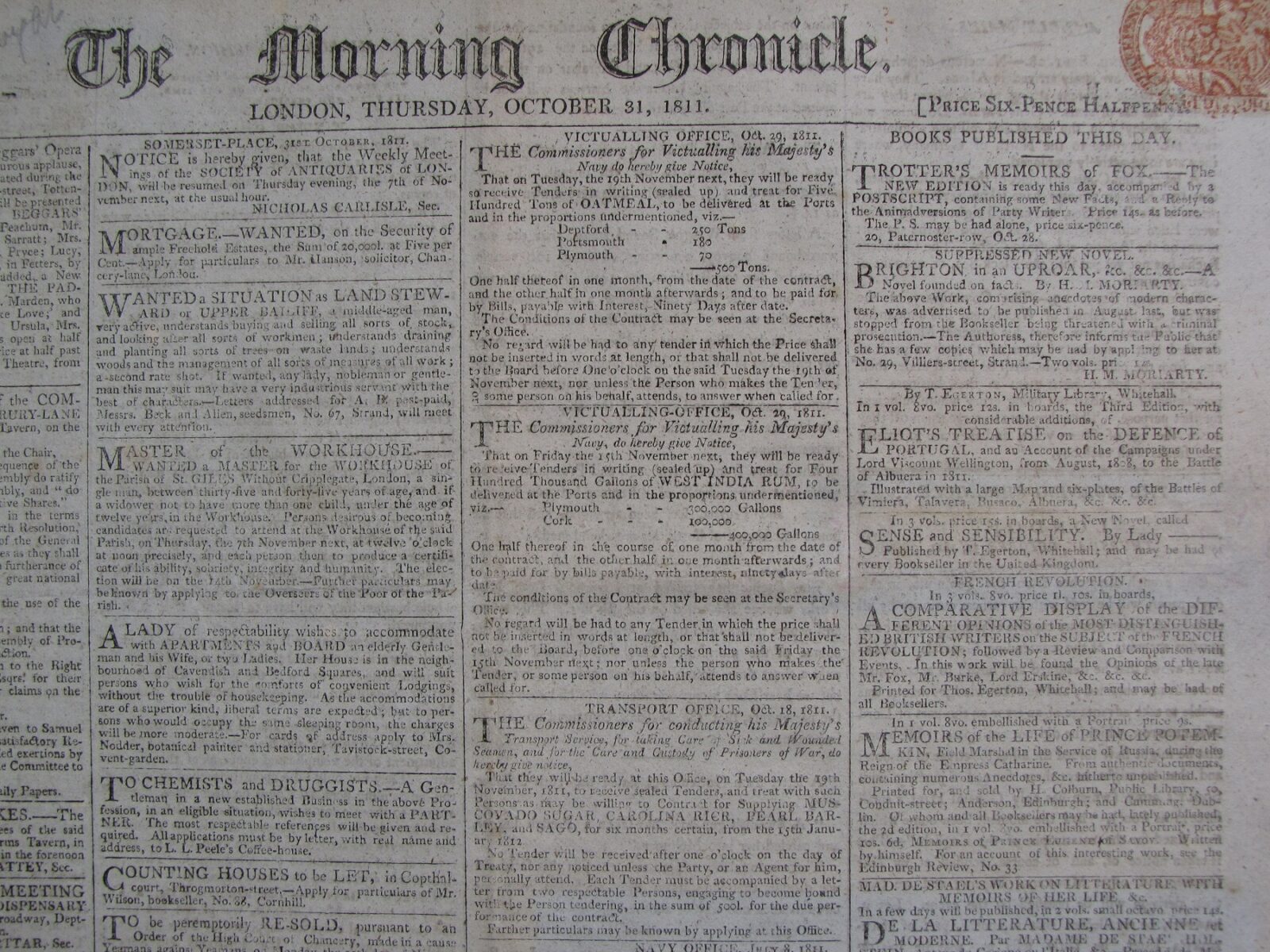 In 3 vols. price 15s. in boards, a New Novel, called
SENSE and SENSIBILITY. By Lady —
Published by T. Egerton, Whitehall; and may be had of
every Bookseller in the United kingdom 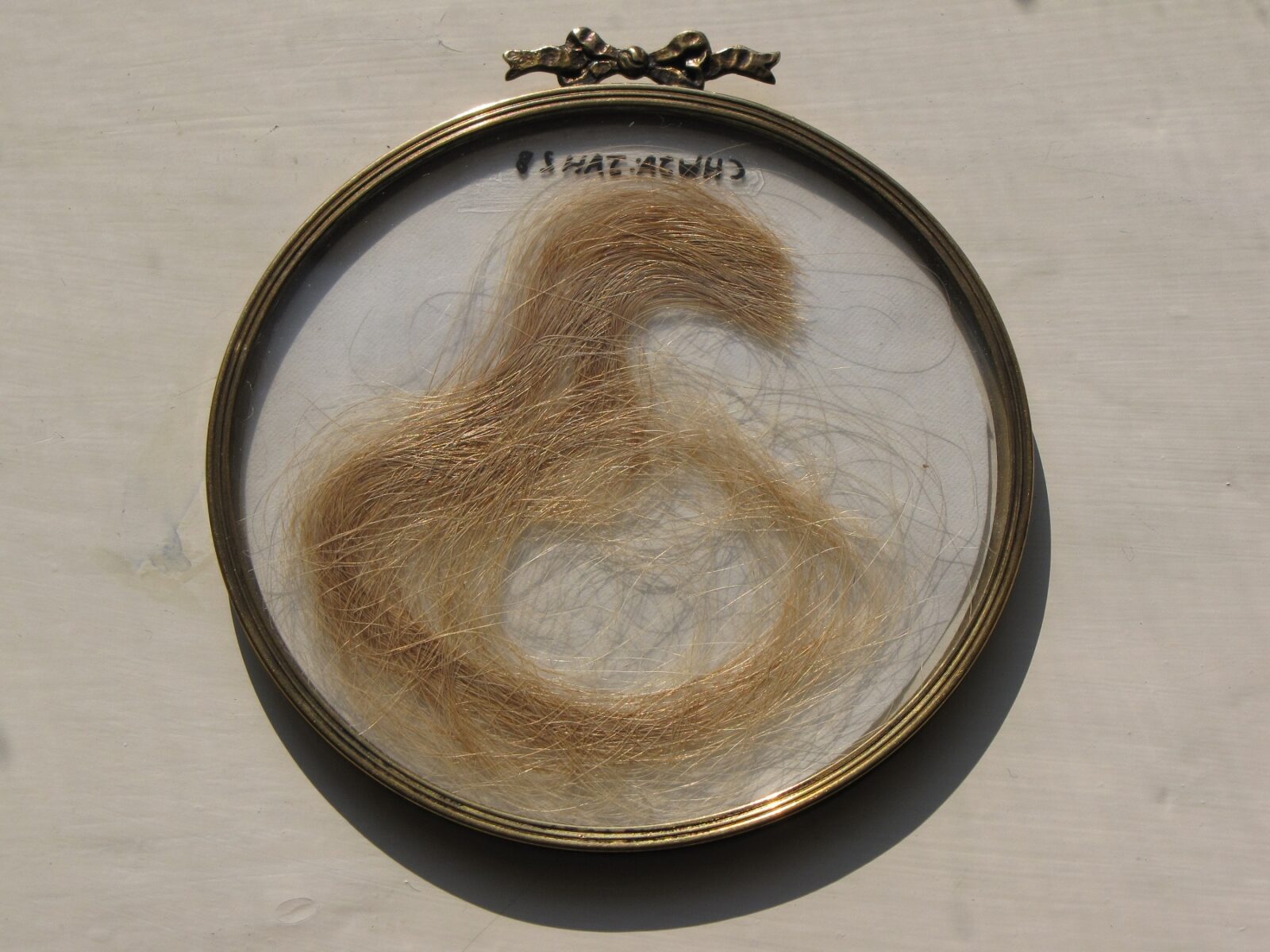 In Sense & Sensibility, both Elinor and Marianne are haunted by locks of hair – Elinor by the ring set with a lock of Lucy Steele’s hair that Edward Ferrars wears, and Marianne by the lock of her own hair which Willoughby takes from her as a love token and then returns.

Today locks of hair can seem rather morbid, but for the Georgians a lock of hair was a symbol of love and constancy – although in Sense & Sensibility, both of the relationships marked with locks of hair end up going awry.

Here we show a lock of Jane Austen’s hair, set in a glass frame, probably cut by Cassandra after Jane’s death. 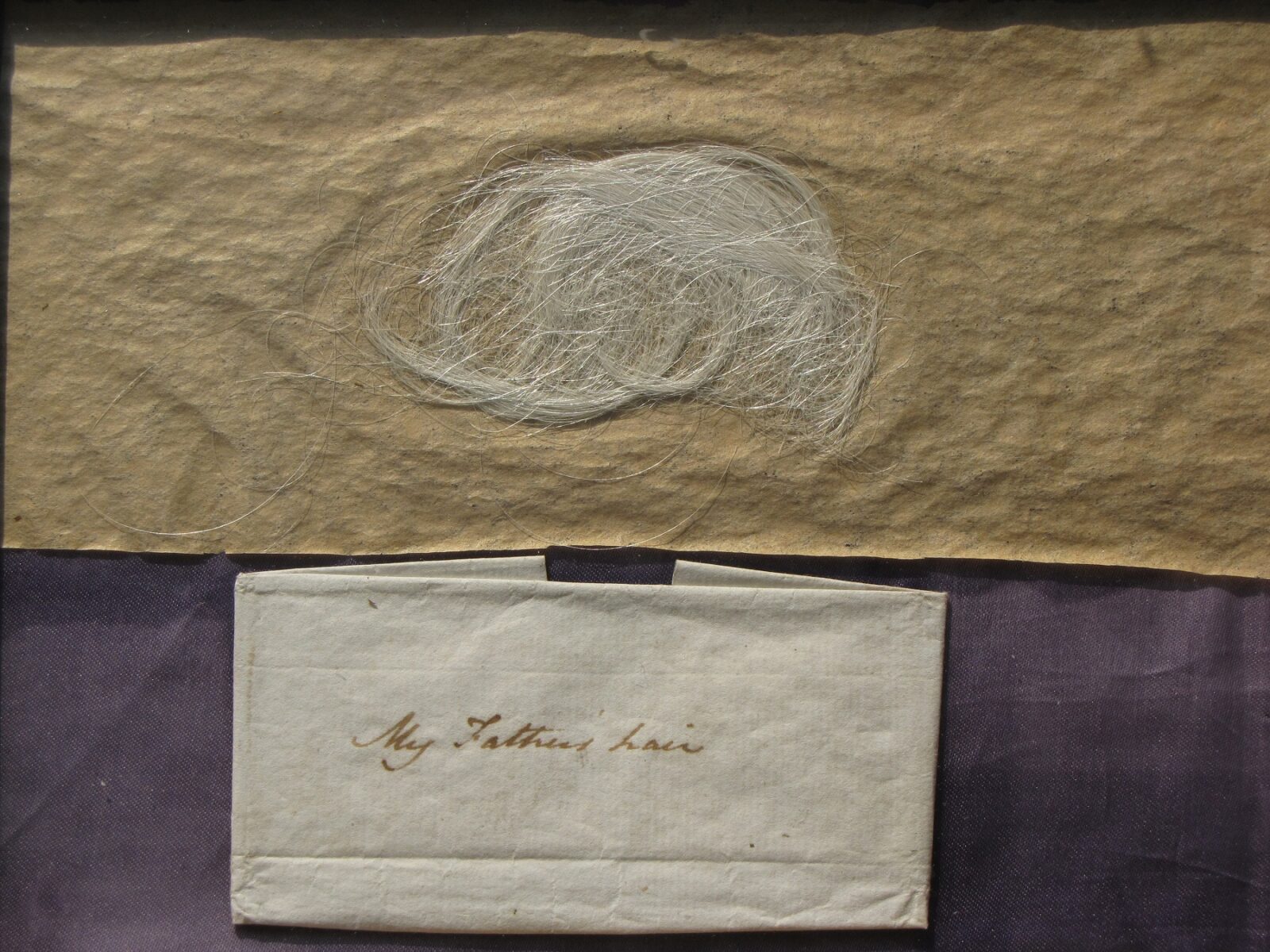 A lock of Rev George Austen’s hair, with a paper wrapping entitled ‘My Father’s hair’ in Jane Austen’s hand 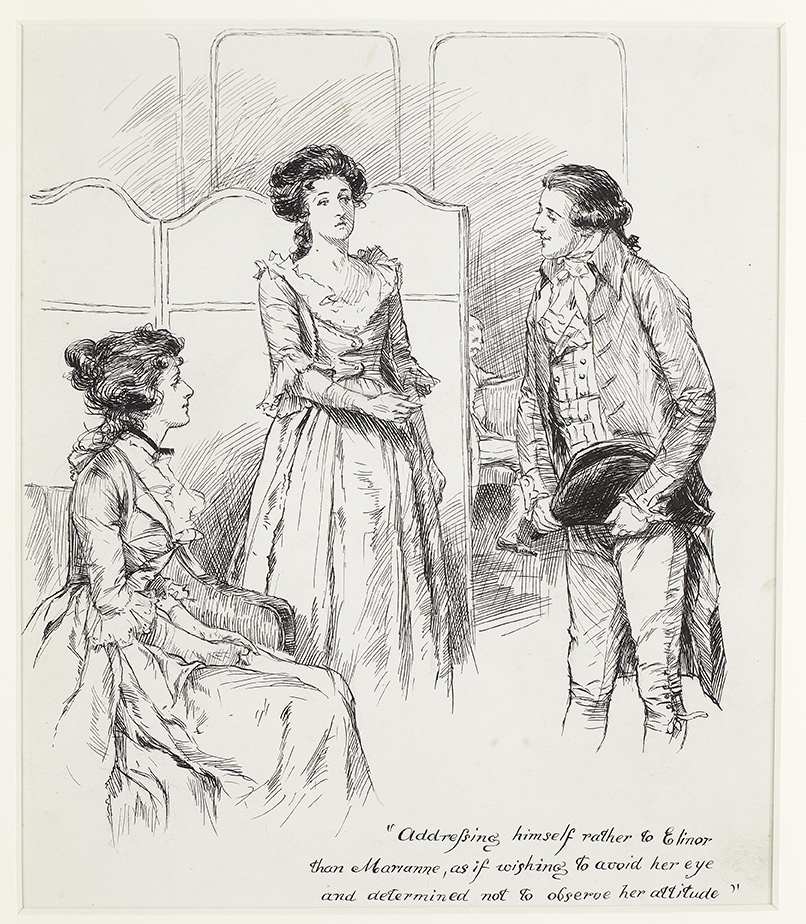 Illustration by Chris Hammond for Sense & Sensibility, showing Willoughby addressing Elinor and Marianne in a ballroom.

‘addressing himself rather to Elinor than Marianne, as if wishing to avoid her eye, and determined not to observe her attitude’

We hope you enjoyed it! Please tell us on social media using #JaneAustensHouse