The Trial of Jane Leigh Perrot

This extraordinary document from 1800 is perhaps the last thing that Jane and Cassandra Austen would have wished to see preserved in their beloved Chawton home, evidence as it is of a shocking episode in their family life that all concerned must have preferred to forget.

The story is well-known. In August 1799, in Bath, Jane Austen’s rich and respectable aunt Mrs Jane Leigh Perrot was arrested for stealing a card of lace from a haberdashery shop in the city. It is thought that this may have been a blackmail attempt, which the Leigh Perrots determined to resist. Bail was refused, as a consequence of which Mrs Leigh Perrot was obliged to spend seven months in custody at Ilchester gaol in the insalubrious home of its governor, Edward Scadding, where she was joined by her devoted husband, Mrs Austen’s brother James Leigh Perrot. The trial itself took place at the next Taunton Assizes, where, as this account tells us, the jury took just fifteen minutes to find the accused not guilty. Had the verdict gone the other way, the death penalty would have been pronounced but almost certainly transmuted to transportation.

While in custody, Mrs Leigh Perrot corresponded with her Cholmeley relations, from which we know that Mrs Austen offered the company of Jane and Cassandra first at Ilchester and later at the trial itself. Had they any idea that their mother was making such an offer? To Mrs Leigh Perrot’s credit, she declined to subject them to the ordeal. But this was surely Jane Austen’s closest and most horrifying brush with the brutal criminal justice system of the time.

Nothing like this sensational episode finds its way into Austen’s novels, and it is not referred to in any of her surviving letters. However, the very many wealthy, pompous and dominating older women in the novels, from Lady Catherine de Bourgh to Mrs Churchill, surely owe something to Austen’s relationship with this unloved aunt.

As for the document itself, it is by no means certain that the Austens ever saw or read it. To us, its value lies in its contemporaneity as primary source material for biographers and historians. 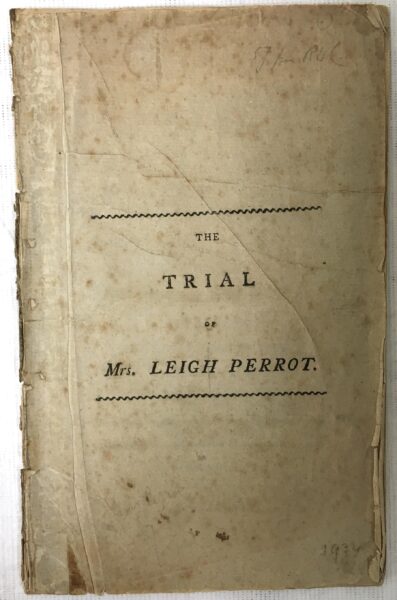 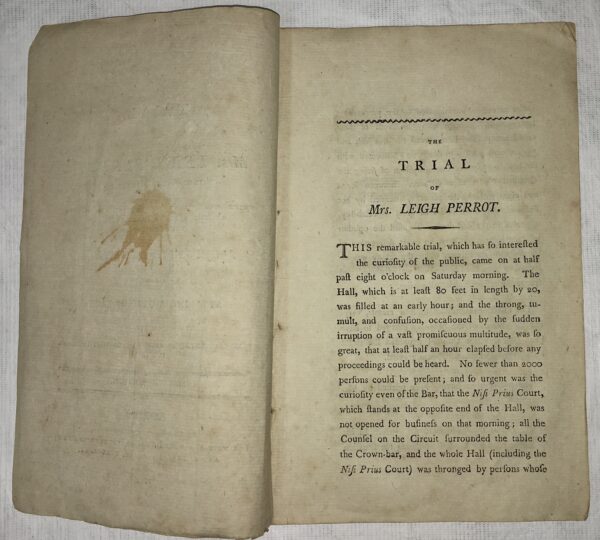 Object details: This pamphlet was published by West & Hughes of Paternoster Row, London and C Chapple of Pall Mall London.  This is a Second Edition. It measures 8.5” x 5.5” and consists of 32 pages. It is believed to be only copy of the London edition remaining, although there were also editions published in Bath and Taunton.